The 2016 New York International Auto Show will start with two press days occurring March 23rd and 24th, followed by a public show that runs through April 3rd of 2016.

"The New York Auto Show is a unique combination of new automotive ideas, technological innovation, exceptional concept cars and nearly 1,000 of the latest new cars and trucks—all under one roof.  Over one million visitors are expected to visit the show this year to see what is truly possible from the auto industry." - the New York Auto Show website.

To view the AutoKnowledge coverage from the show you may load the 2016 New York Auto Show saved workspace in our Vehicle Information Center.

Here are some of the 2016 New York Auto Show highlights in a few categories: 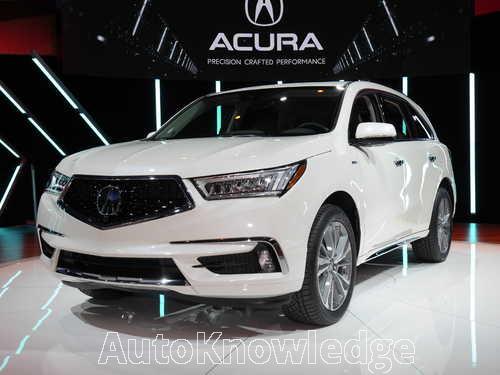 2016 Acura MDX Sport Hybrid: Acura is using the 2017 MDX to showcase the styling cues that will launch across the rest of their lineup. The MDX loses the metallic 'beak' trim seen on past Acura's, and gains a trapezoid 'Diamond Pentagon' grille shape reminiscent of the Precision Concept, sharper 'Jewel Eye' LED headlamps, a new hood design, chrome rocker panel accents, and revised exhaust tip integration. Inside, the 2017 MDX gains new wood trim options in olive ash burl or black limba and a standard electric parking brake. The MDX is still offered with the 3.5L V-6 and 9-speed automatic transmission found in the 2016 model, but also adds a Sport Hybrid model using a 3.0L V-6 with cylinder deactivation mated to three electric motors (one at each rear wheel and one connected to it's seven speed dual clutch transmission). The MDX offers torque vectoring across the AWD models - the Sport Hybrid's system is electronic through it's rear wheel motors, while the non-hybrid system uses a more conventional rear differential. Safety features include automatic emergency braking, lane departure warning with lane keeping assist, forward collision warning, adaptive cruise control, and road departure mitigation. 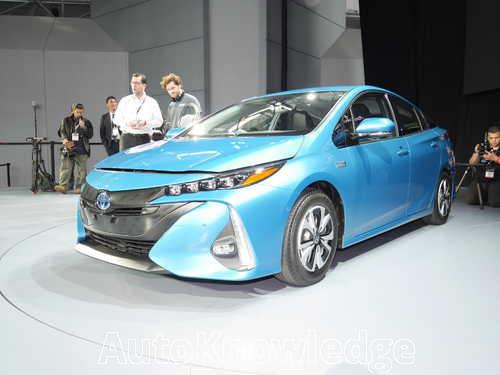 2017 Toyota Prius Prime Plug-In Hybrid: Toyota released a new generation of Prius plug-in hybrid, now labelled the 'Prius Prime'. The new model has revised styling compared to the redesigned Prius Hybrid, and fuel economy gains compared to the previous generation. The largest differences between the Hybrid Prius and the Prime models can be seen in the rear deck treatment, and the head- and tail-light designs. The headlights mimic the horizontal ones on the Mirai models, and the taillights have a curving design that spans the entire width of the rear end. Like other Prius models, the instrument cluster is mounted in the center atop the dash. A newly available 11.6 inch vertical infotainment display becomes the highlight of the dashboard. The same 1.8L I-4 engine and CVT from the Prius are seen in the Plug-In model, but an 8.8 kWh battery pack (double the size of the previous generation) means the Prime can travel up to 22 miles on electric power alone, at speeds up to 84 mph. After a full charge (~5.5 hours on a conventional 110V plug) and with a full tank of fuel (11.3 gallons) the Prime should net over 600 miles of range - a 240V power source can cut the charging time in half. Toyota is estimating a combined 120 MPGe rating for the Prime, with fuel economy from the engine alone matching that of the non plug-in model. For improved economy, the Prius Prime uses aluminum for it's hood and carbon fiber for the tailgate. Toyota's Safety Sense P suite brings an forward collision prevention with pedestrian recognition, lane keeping assist, adaptive cruise control with stop and go, and automatic high beam headlamps - blind spot monitoring and rear cross traffic alert are available as options. A smartphone app will allow owners to monitor charging status and scheduling, turn on the climate control systems, and share their fuel economy stats. Apple's Siri Eyes Free is offered, as is Qi wireless device charging.

2017 Subaru Impreza Sedan: The redesigned Impreza compact sedan debuted at the 2016 New York auto show. The Impreza models move to a new platform that is stiffer than before to combat NVH concerns - the new platform also adds wheelbase length for more interior room. Other updates include added safety equipment and sportier styling. Styling is cribbed from recent Subaru concepts - bodyside lines mimic those first seen on the Impreza concepts in 2015, but the production head- and tail-lamp shapes are much less futuristic. The new dashboard relocates the HVAC vents alongside the central display screen, keeping the main display and driver info display up top closer together. The new steering wheel has more detailing and metalwork on the lower spoke, and material improvements come to the dash, door panels, and seating surfaces. The Impreza still uses a 2.0L H-4 engine, but it now makes 152 horsepower (instead of 148). The only transmission will be a CVT unit - in higher trim levels it will utilize a ?manual mode? with paddle shifters that flick through seven pre-set ratios. Apple CarPlay and Android Auto connectivity will be included on all models, and Subaru's EyeSight safety system will bring available adaptive cruise control, automatic pre-collision braking, lane-departure warning with lane-keeping assist, blind-spot monitoring, rear cross-traffic alert, as well as a new reverse automatic braking system. Trim lines will include 2.0i, Premium, and Limited as before, and a new 2.0i Sport model adds to the lineup. The 2.0i Sport has revised suspension tuning, 18-inch wheels, keyless ignition, aluminum pedals, and sporty interior and exterior enhancements. 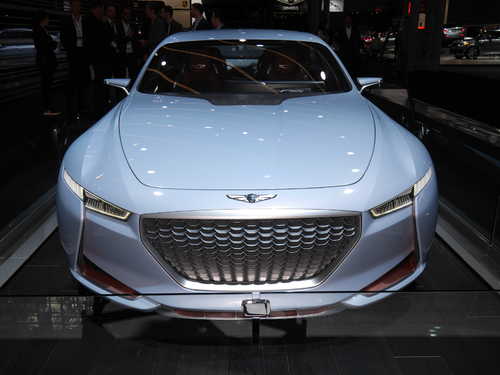 Acting as a quick overview of what is being released at the show - and a guide to what content will be available - is a list that will be updated live as we capture and then integrate our images, OEM press kit images, and OEM press releases from the show into our Vehicle Information Center.