GM's EV Day on March 4th, 2020 followed up on announcements from their Capital Markets Day in February where they announced their roadmap for future models, their updated BEV3 electric vehicle platform, and information on Cadillac's first all-electric SUV.

GM's EV Day revealed 10 new production electric vehicles (9 of which will use the new BEV3 platform) from all four of GM's brands (Chevrolet, Cadillac, Buick, GMC) with driving ranges of up to 400 miles. The presentation took place in front of employees, media, investors, and others gathered at its Warren, Michigan technical center.

Here are the models that were displayed at the event (all are headed to production by 2025):

Chevrolet Bolt Electric CUV: this taller Bolt model uses a 5 inch longer wheelbase than the Bolt hatchback and will launch in the summer of 2021 as a 2022 model. This will be the first non-Cadillac model to feature Super Cruise hands-free driving technology before it spreads to additional vehicles from 2021 to 2023.

GMC Hummer Electric Pickup Truck: this model will be revealed on May 20th and production is expected to begin in the fall of 2021 at the Detroit-Hamtramck Assembly Plant. These models will be equipped with standard 35-inch off-road tires and removable rooftops that can be stored in the frunk.

Cadillac Lyriq Electric SUV: will launch in China in 2021 and in North America in 2022. Cadillac's electric SUV was first announced back in 2019 at the NAIAS in Detroit and an in-the-metal version is likely to be revealed shortly before the 2020 New York Auto Show coming up in early April. Cameras were not allowed at EV Day so the only image is this teaser for the Cadillac Lyric: 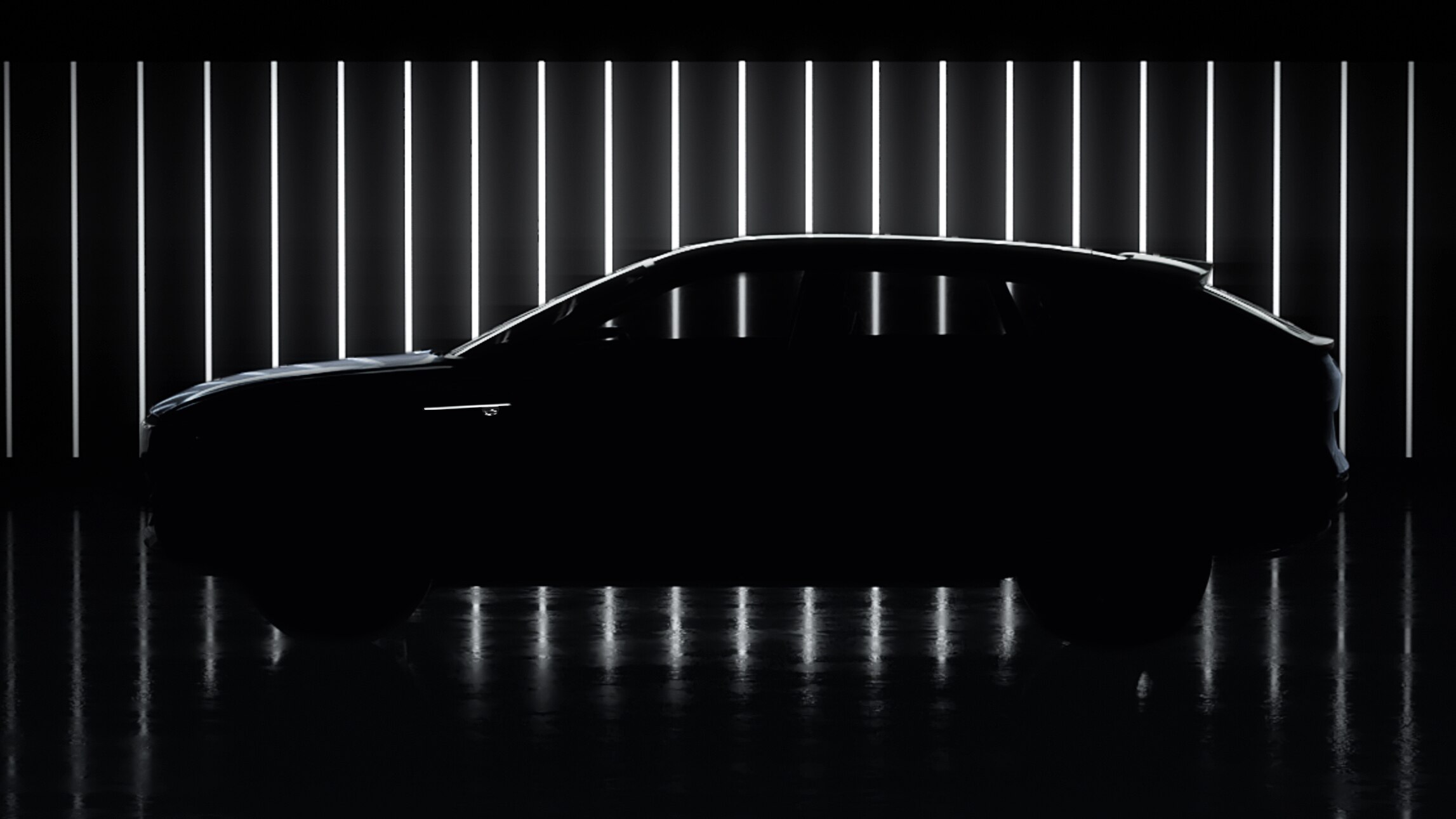 The silhouette looks very similar to the original images Cadillac published back in 2019 during the NAIAS in Detroit: 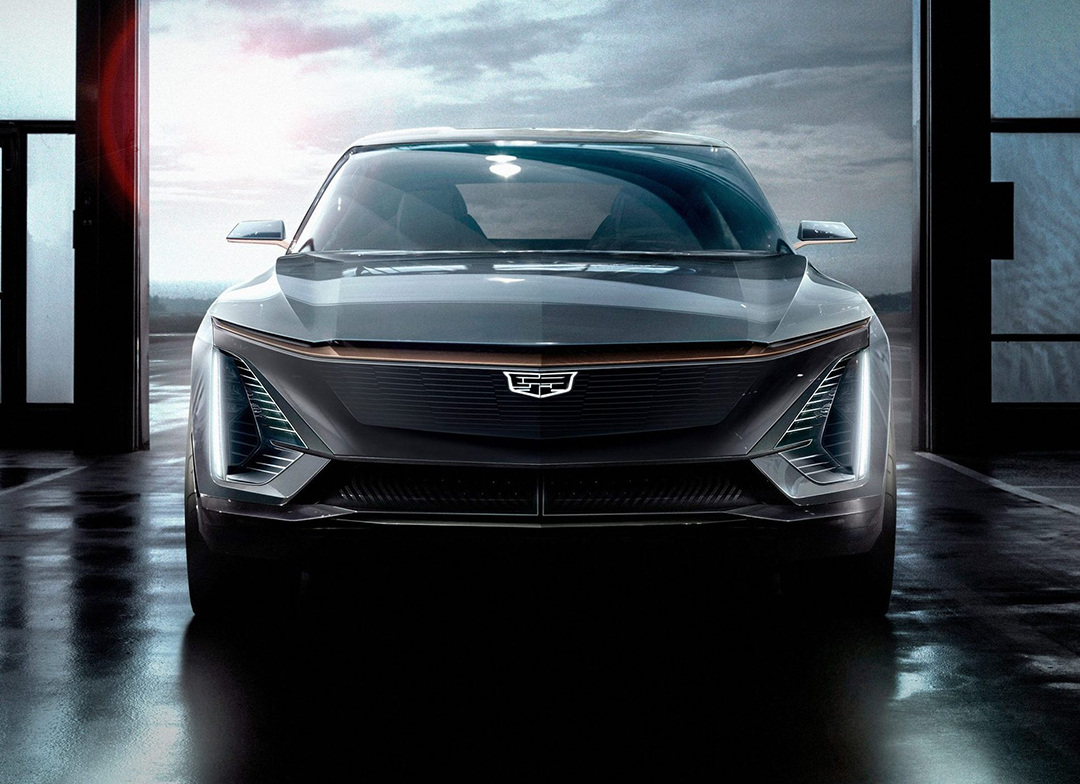 Focused on modularity, this new battery system will allow different types of cells and chemistries to be used in packs ranging in size from 50 kWh to 200 kWh. This will let GM vehicles provide 'up to 400 miles of range or more'. New battery cells will reduce the use of cobalt by 70% to bring down costs and will be produced in conjunction with LG Chem.

Each module will have a dedicated battery-management-system, allowing individual modules to be replaced with new ones, or mixing and matching different chemistries within a battery pack. The BMS for a module will store a full set of data that can be accessed at the end of its life, facilitating the recycling and re-use of the cells. The new tech should bring battery cell prices down to $100 per kWh (~$120 kWh at the battery pack level) which will help future EVs reach price parity with current combustion vehicles. 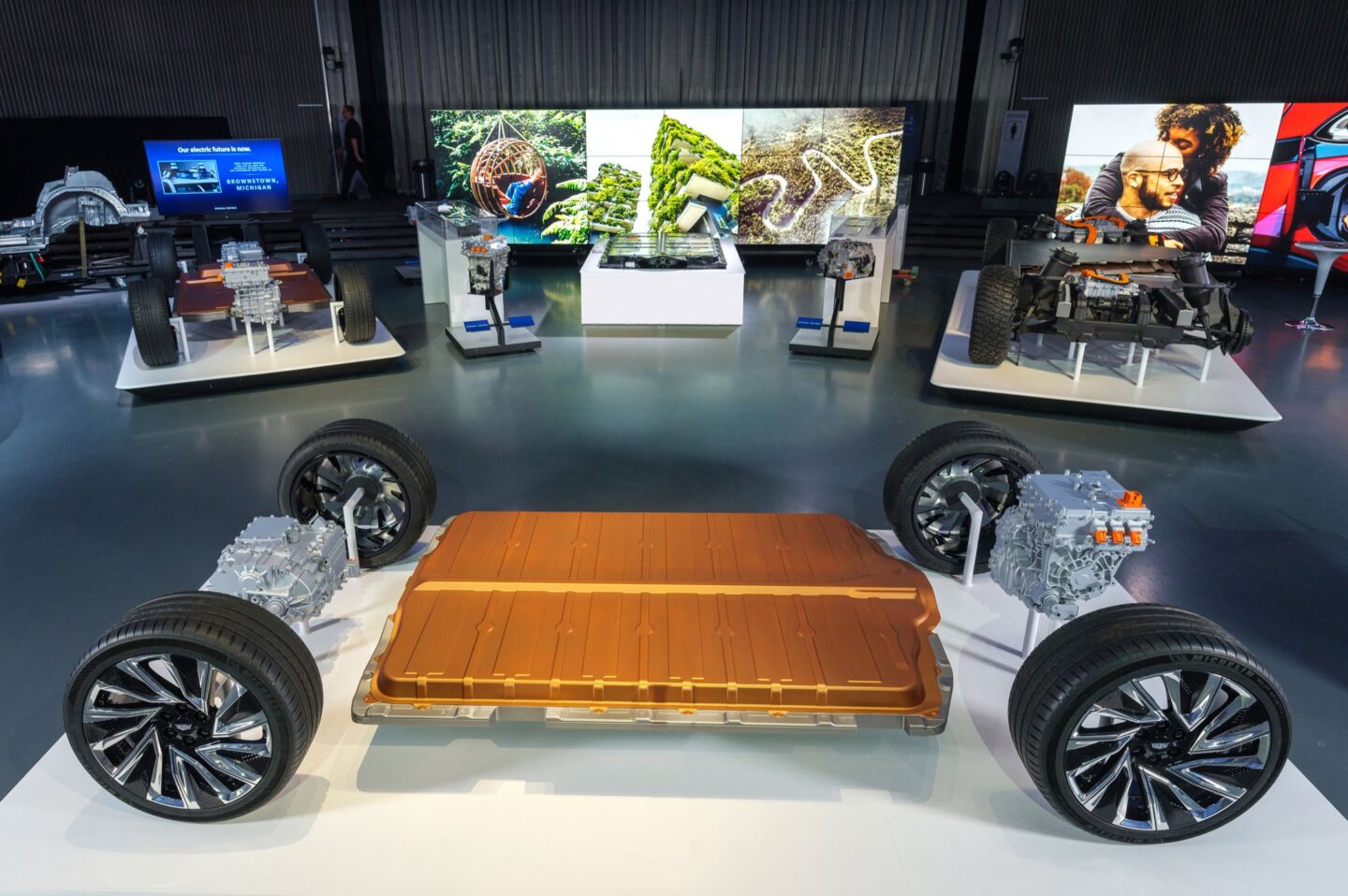 Shown above is GM's slimmest Ultium battery pack layout - packs can be stacked vertically or horizontally in vehicles with modules in quantities of 6, 8, 10, and 12. 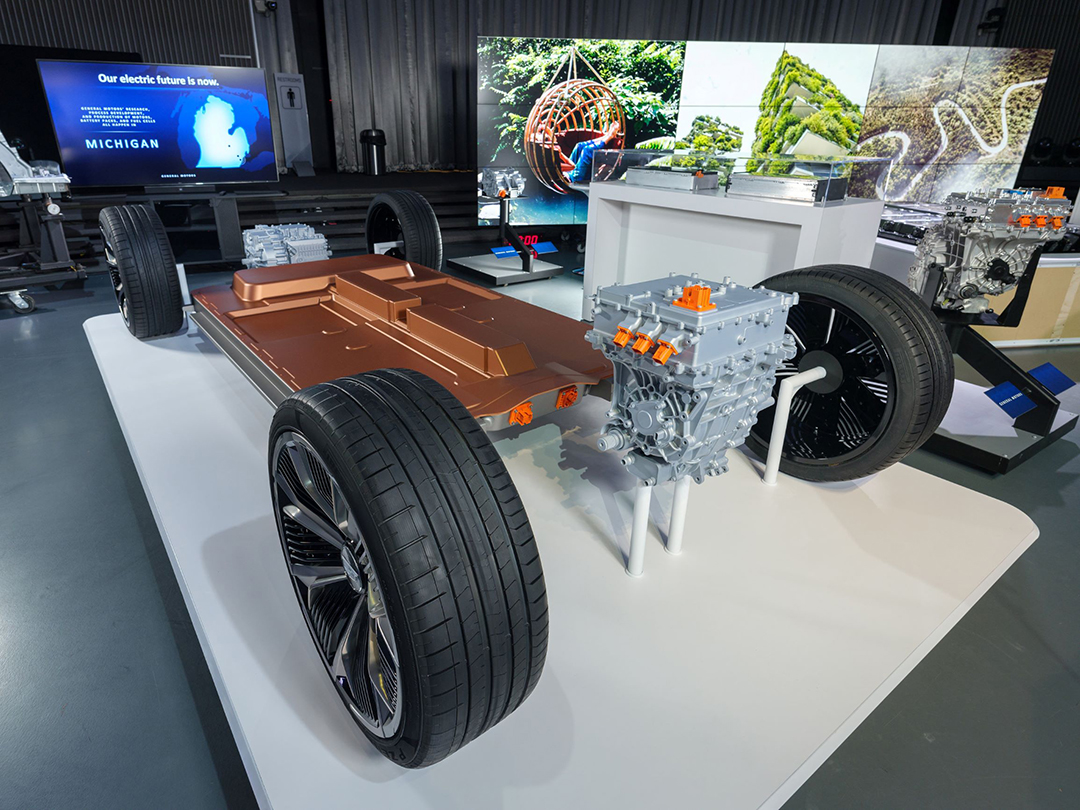 Above is a T-shaped layout with horizontally stacked battery cells to provide more power and a longer range. 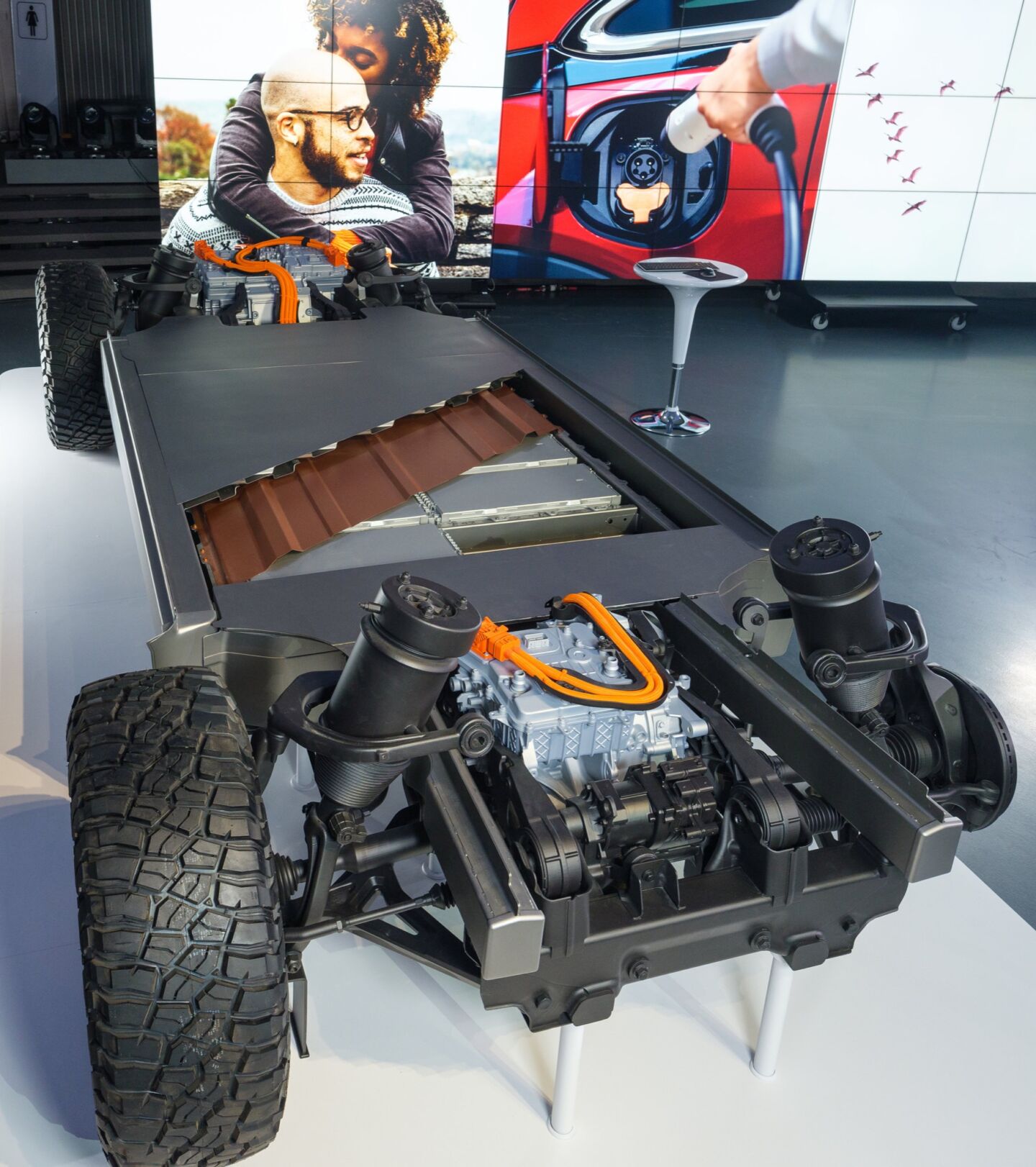 Above is the largest Ultium configuration in an electric truck chassis with vertically stacked battery cells that provide the highest energy density.

These platforms also incorporate GM's new 'in-house-developed' electric motors that can be used in one-, two-, or three-motor combinations. The front-wheel motor is rated at 241 hp and the rear wheel motor at 335 hp. Combinations using one motor in front and two in the back will yield as much as 1,000 hp (first mentioned in GMC's Hummer EV Super Bowl commercial). 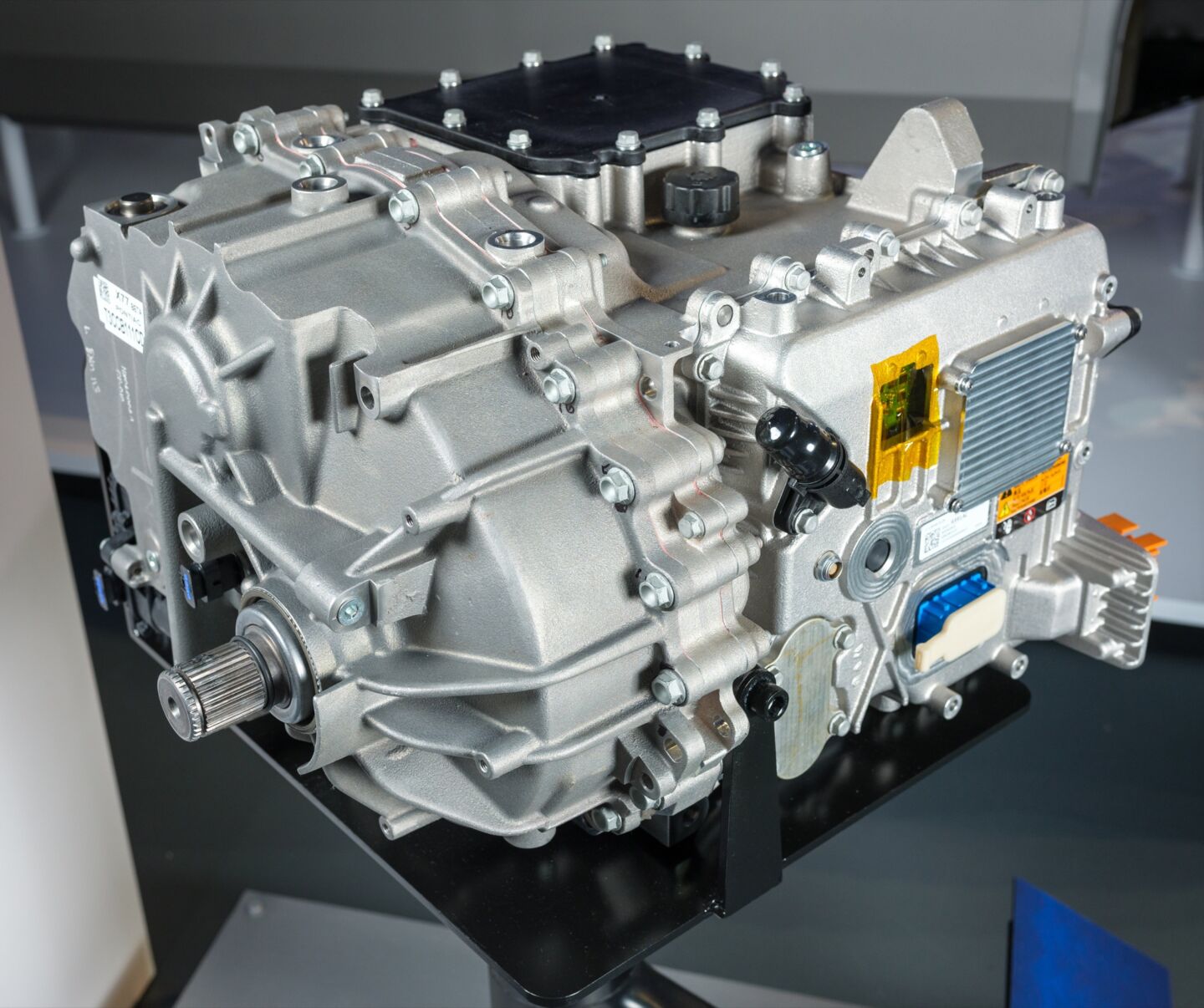 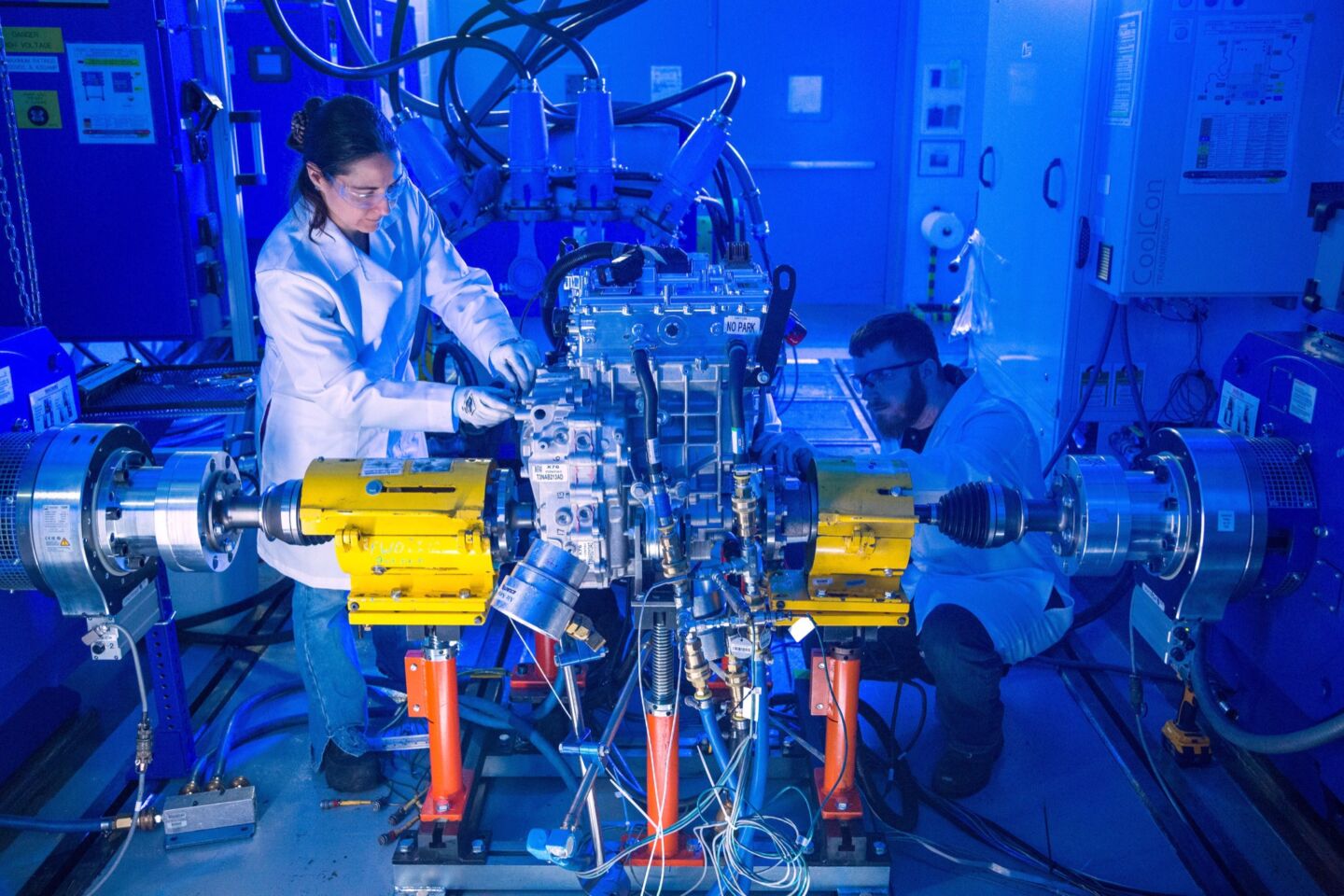 General Motors revealed its updated electric vehicle platform and future EV roadmap at its Capital Markets Day. The first model based on the new platform will be a crossover from Cadillac, likely to premiere at or shortly before the 2020 New York Motor Show. 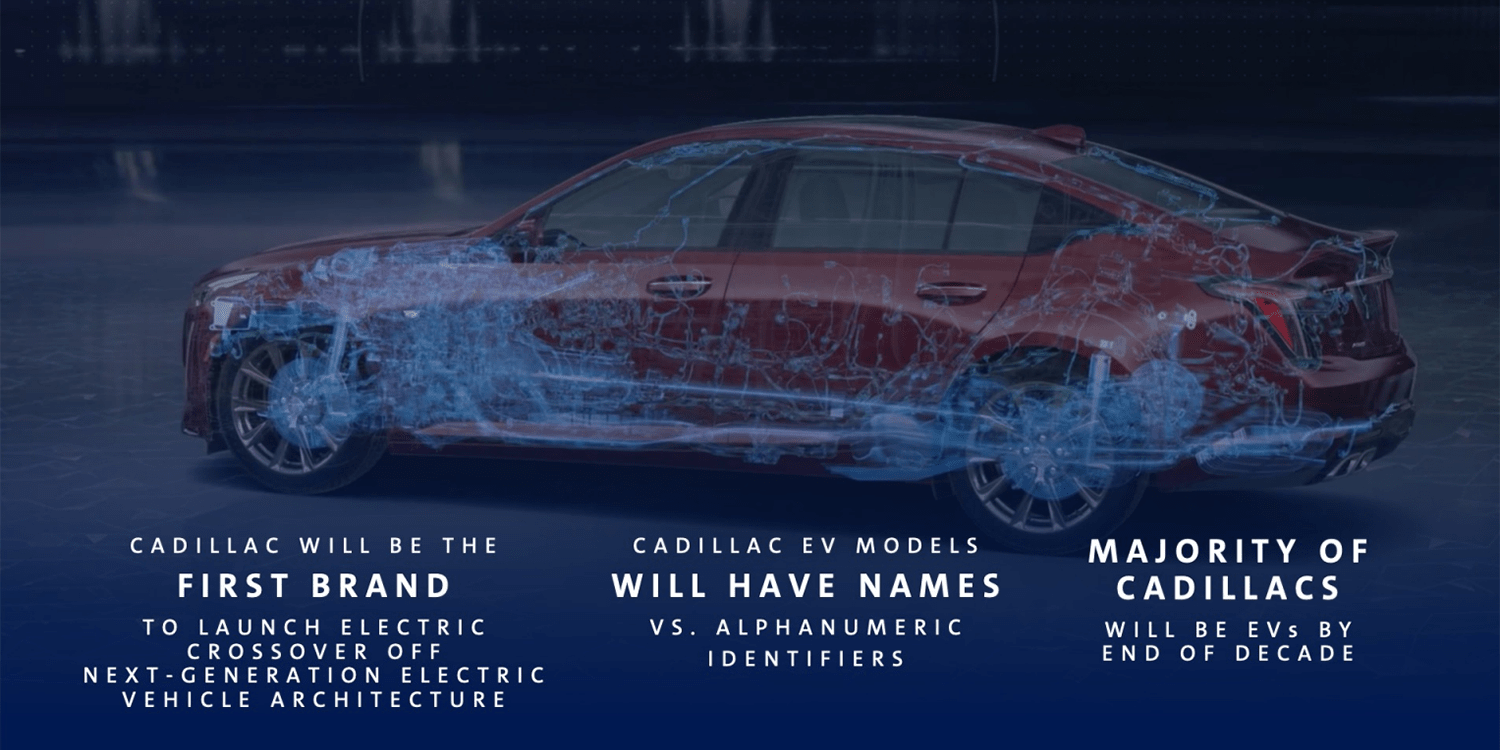 The Cadillac electric SUV will then be followed by the Hummer EV, which was confirmed at the end of January. Cadillac has long been named as the first candidate for the newly developed GM platform BEV3, and a teaser picture of the e-crossover was even published over a year ago.

At the time GM confirmed that Cadillac should be positioned as the leading brand for future electric models of the group. Now, at the Capital Market Day, GM President Mark Reuss now said that Cadillac “will offer mostly electric vehicles by the end of this decade.” He also announced that the electric models will have “names that are words,” unlike many of the internal combustion models that rely on a combination of letters and numbers like CT4 or XT6.

GM's electrical platform uses a flexible architecture that can be adapted to a wide range of segments and body shapes. The new onboard system is up to five times faster than current GM platforms, which should allow a data flow of 4.5 terabytes per hour to handle electric driving as well as future autonomous driving.

In addition to the data network, the core of the platform is the modular battery architecture. GM's President, Mark Reuss, used the analogy of an ice cube tray: “You can put in as much water to make as many cubes as you need,” he said. For smaller BEVs, one could stack six modules, but also “8, 10, 12 or even 24 (modules) stacked on top of each other”.

The General Motors plant in Detroit-Hamtramck is being converted to produce solely electric vehicles with investments of 2.2 billion dollars. GM also has plans to build a battery cell factory in Ohio with LG Chem for 2.3 billion dollars.